A drive along the North Coast

First on the agenda this morning was a visit to the Grand Mosque, the only mosque in Oman open to non Muslims. We were there by 9.30 and joined a couple of coach loads of tourists fixing head scarves and removing shoes. 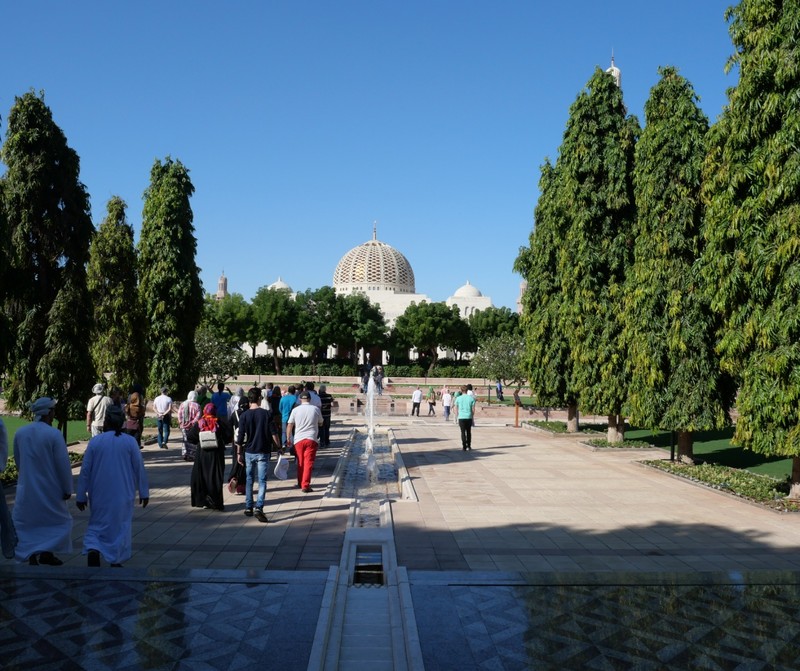 The first building we entered was, we thought the main mosque, and rather disappointing. 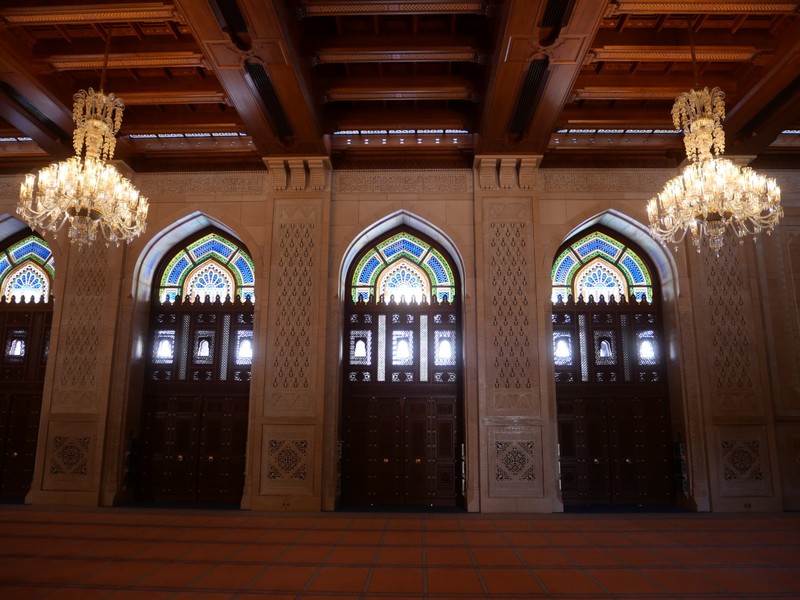 But, as we put our shoes back on, I overheard a guide telling his group that there was more to see around the corner. So we followed him, and sure enough, there was plenty more to see! We had been in the female prayer hall. 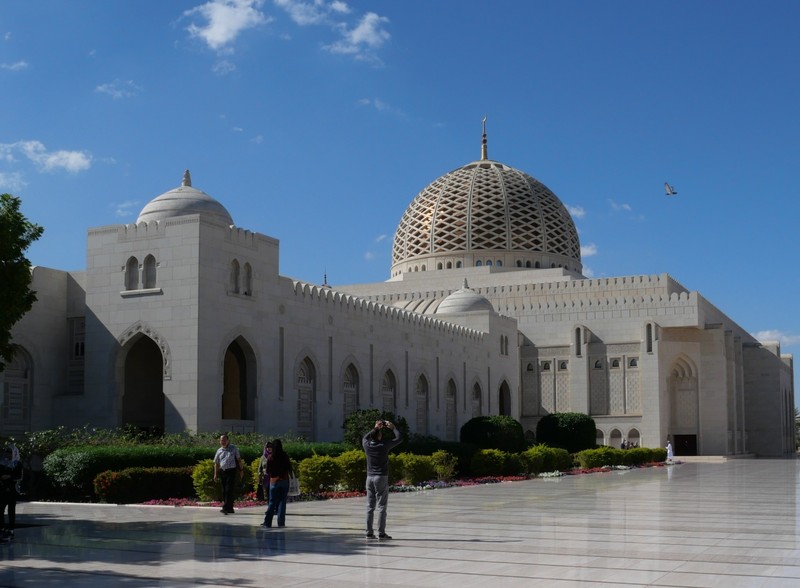 The men's mosque was an altogether much more magnificent affair. It was completed in 2001, and until recently boasted the largest carpet and the largest chandelier in the world. The records have been pinched by the Emiratis and the Quataris. 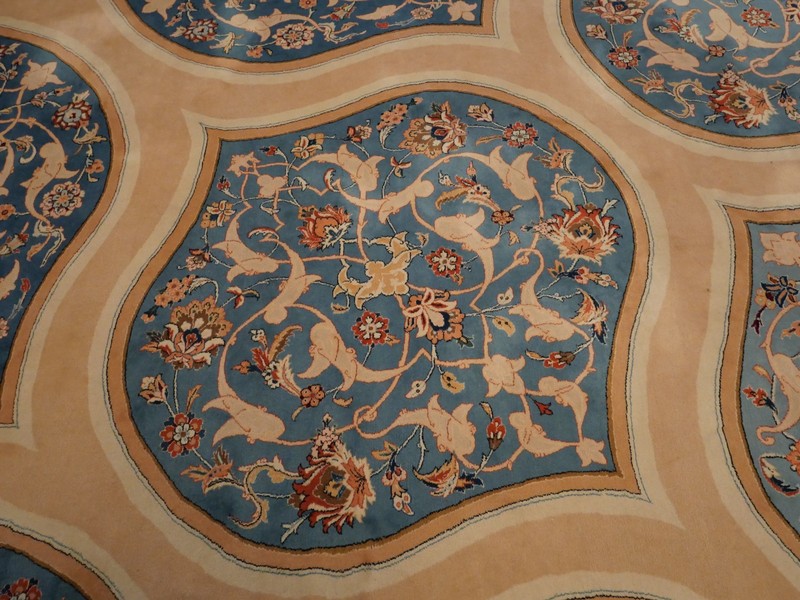 A section of carpet 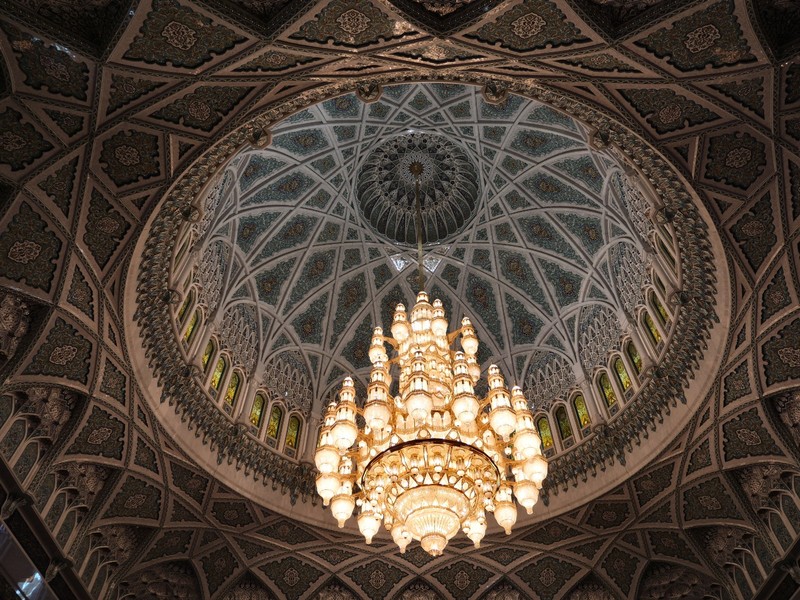 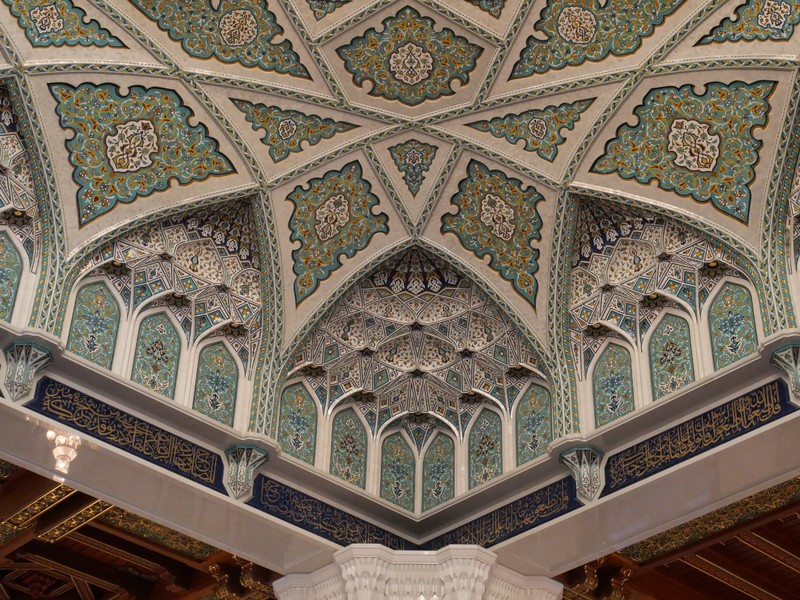 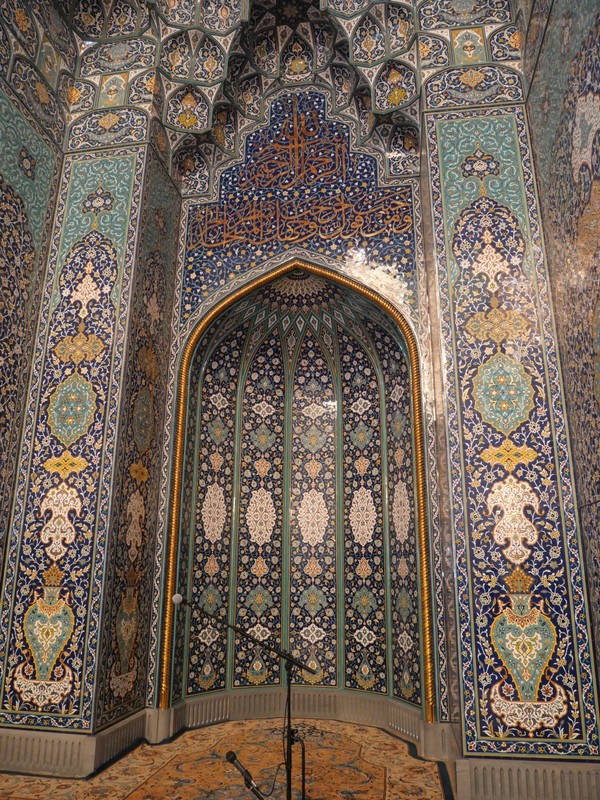 The ceilings and walls are covered in beautiful mosaics, and the chandelier really is magnificent. After walking around and taking pictures, we went outside where there was more to see. Around a paved courtyard there are corridors (rather like cloisters), with alcoves of stunning mosaics. 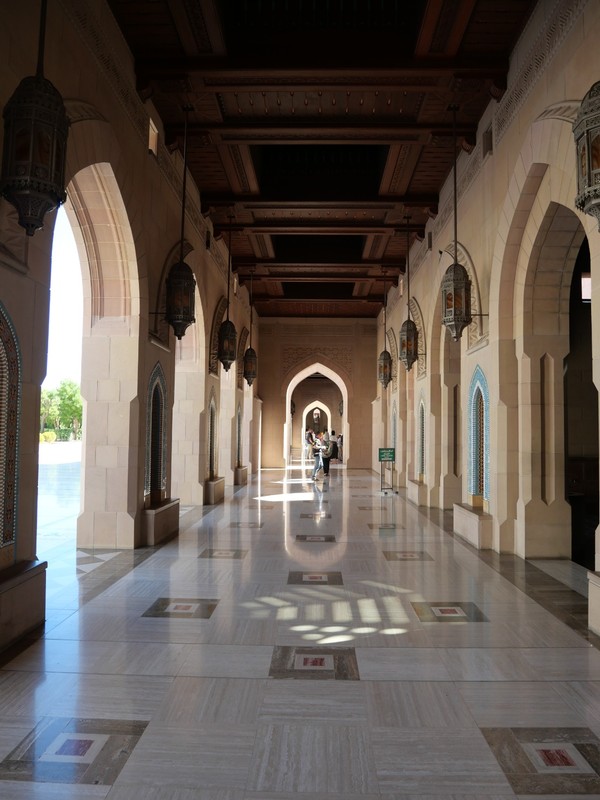 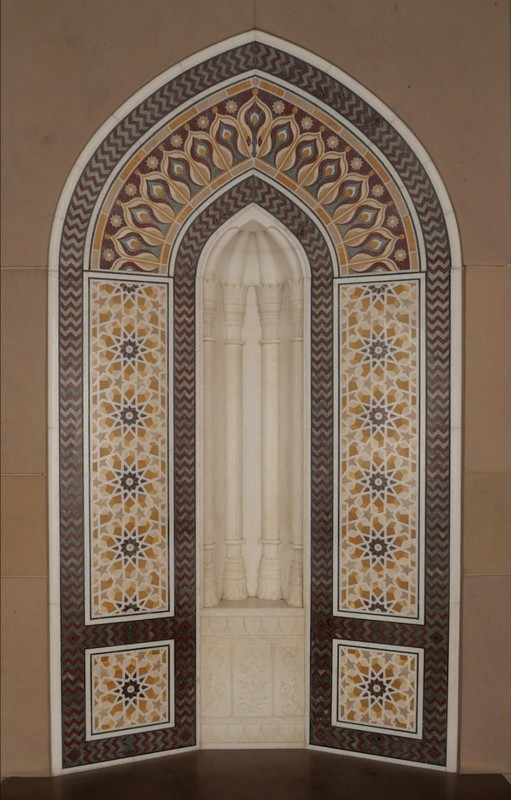 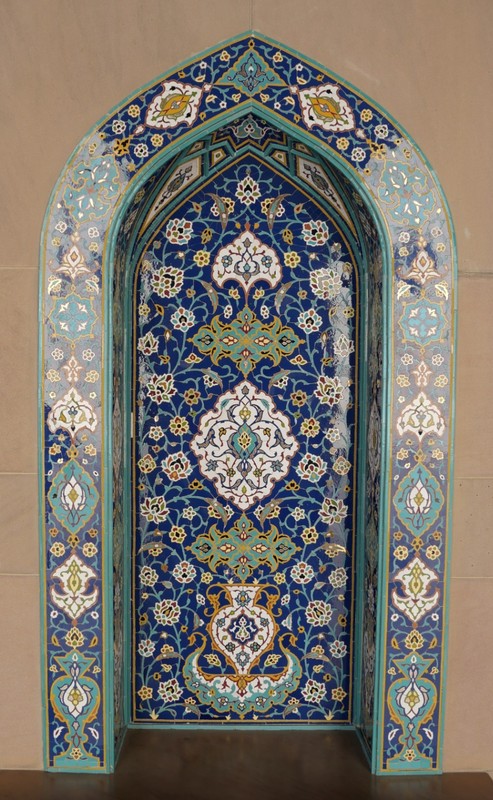 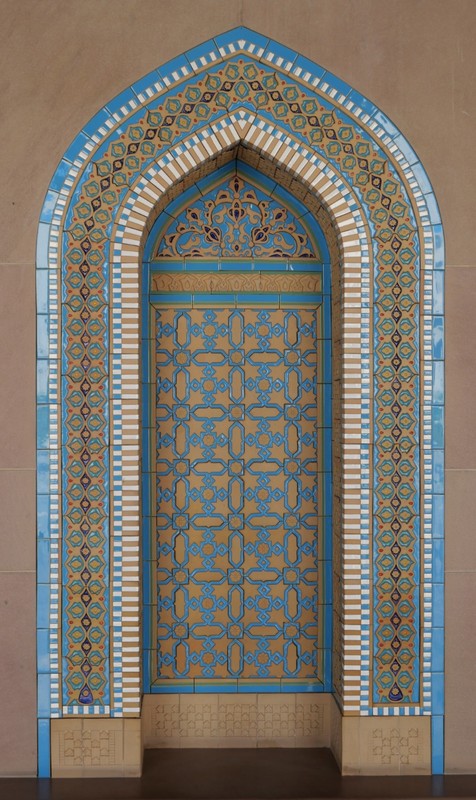 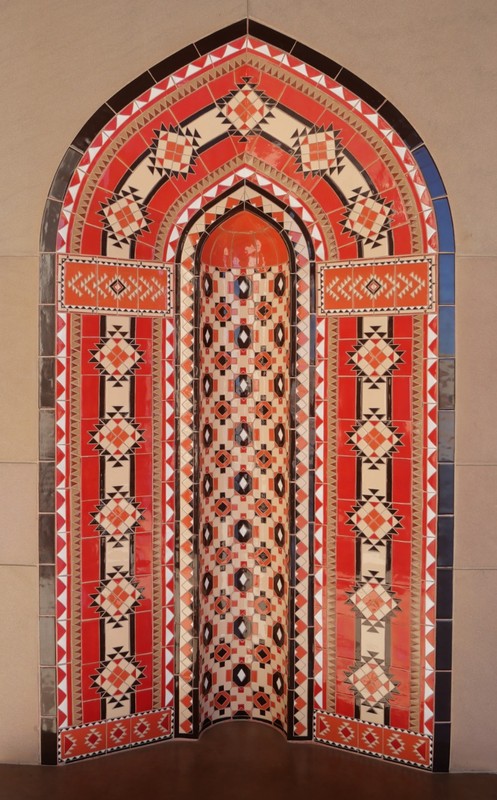 The gardens were lovely as well, and there was an army of gardeners tending to everything.

At 11 the mosque closed to the infidels and we were hustled out and back to the car. It was 25° in the shade, and we were glad to take out head scarves off. 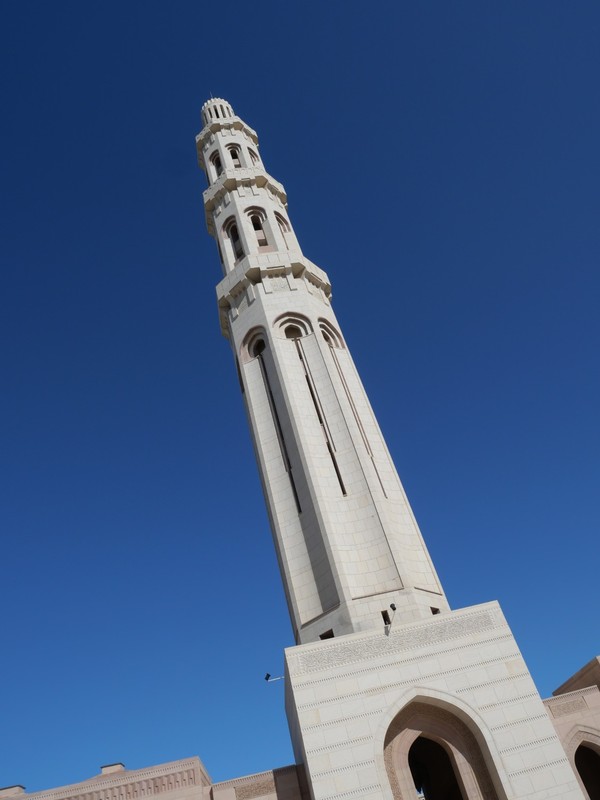 We joined the expressway and headed further west along the coast, until we came to Al Seeb. Janey's guide said give it a miss, the Lonely Planet said don't miss it if you would like to see a typical Omani town. So we thought we would give it a chance. The corniche was promising . 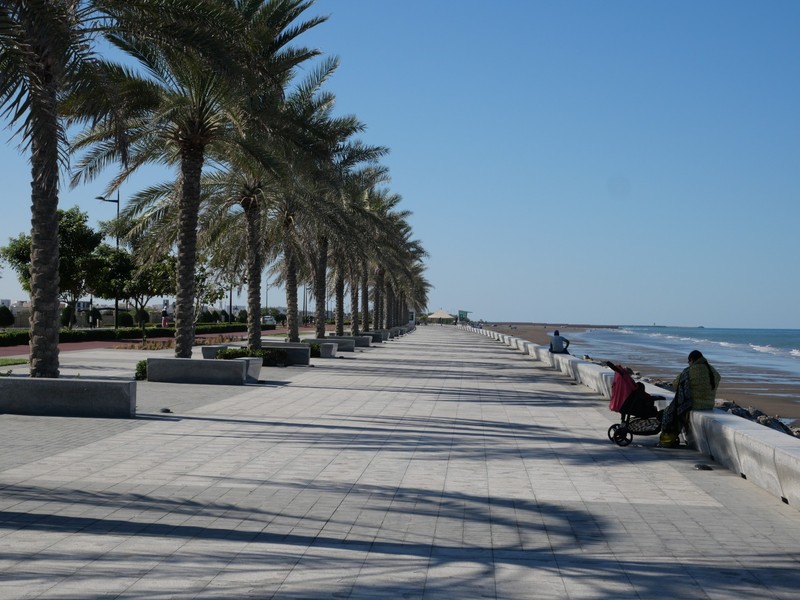 The waterfront in the centre of town was given over to the souk and a huge number of shops selling live birds and animal feed. 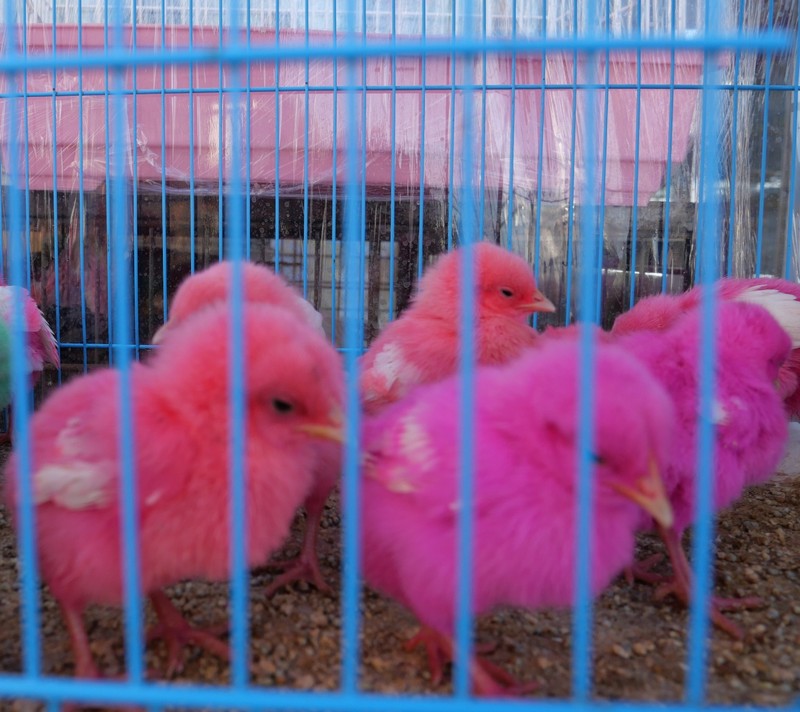 We wandered along the 'paseo' and watched a group of Omani men playing cards. In no time at all we were invited to join them in a cup of Omani coffee called Qahwa - not too strong coffee with cardamom. We had a nice chat and then moved on to investigate the souk.

In the souk we chatted to two guys selling dried lemons. I asked if I could buy 4, they gave me half a dozen as a gift. 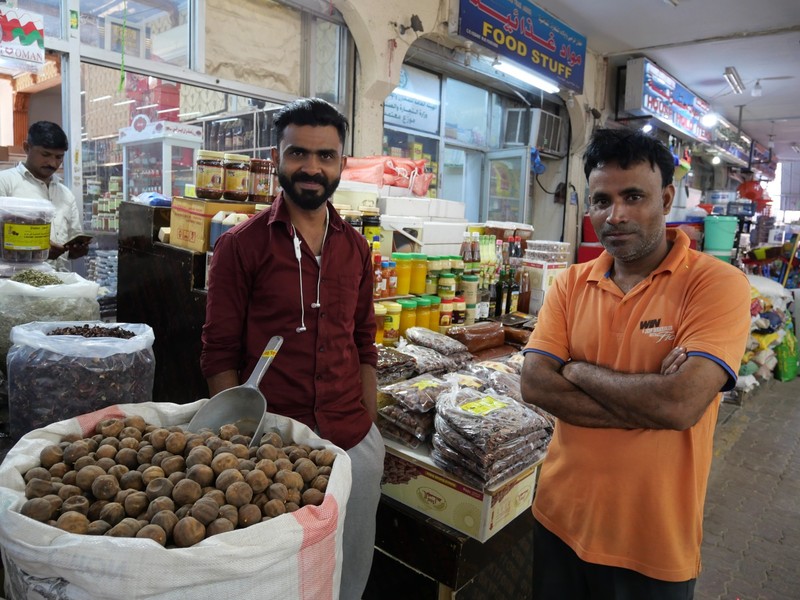 Now it was time for lunch. We fell on our feet, finding a restaurant dedicated to fish and sea food. We chose our fish, ordered rice and a salad and waited for the fish to be grilled. It was coated in garam masala, and absolutely delicious. The only snag was that we were expected to eat it with a plastic teaspoon! After much searching around two forks were found, sent to the kitchen for a wash and then delivered. No chance for a knife though. Our meal was accompanied by songs from the Koran. We could read the translation on a TV on the wall, karaoke style! The little restaurant did a thriving trade in takeaway. A steady stream of men came, and went clutching a blue poly bag with an aluminium tray of food.

We drove a little further west to Barka, but there wasn't much to see there; a rather dirty beach with lots of identical fibreglass fishing boats and a mosque in the sand. 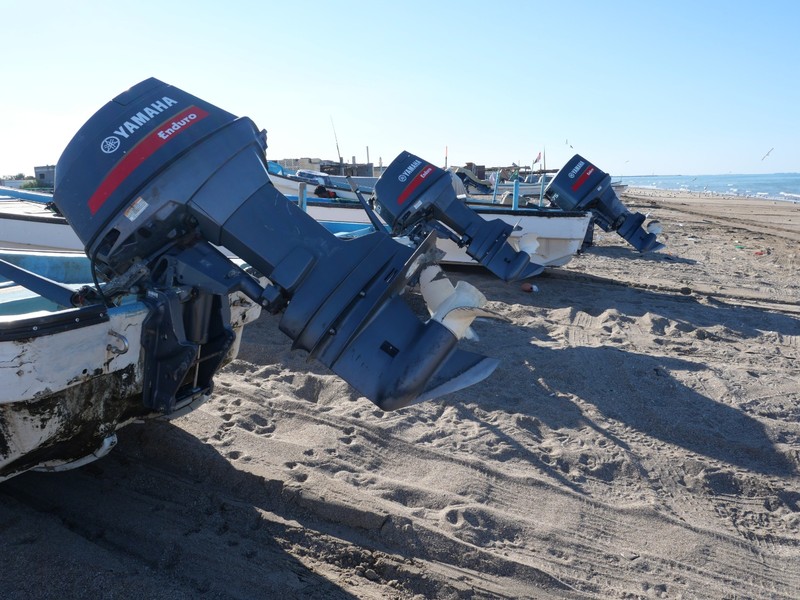 Interestingly, there was a mosque every 500 metres along the beach. 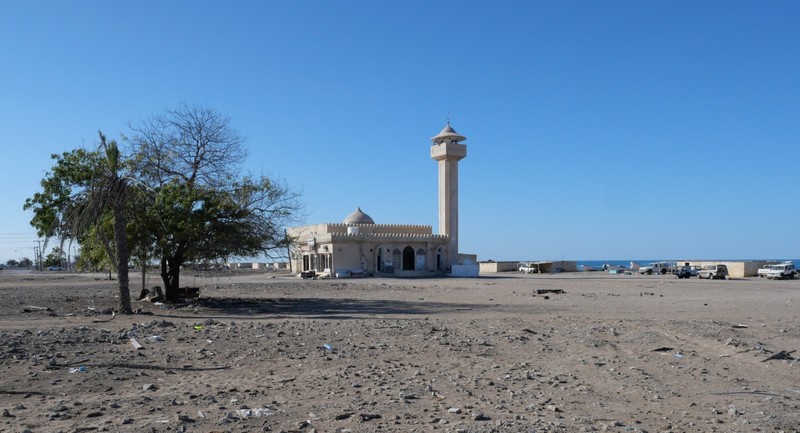 This one had outside seating! 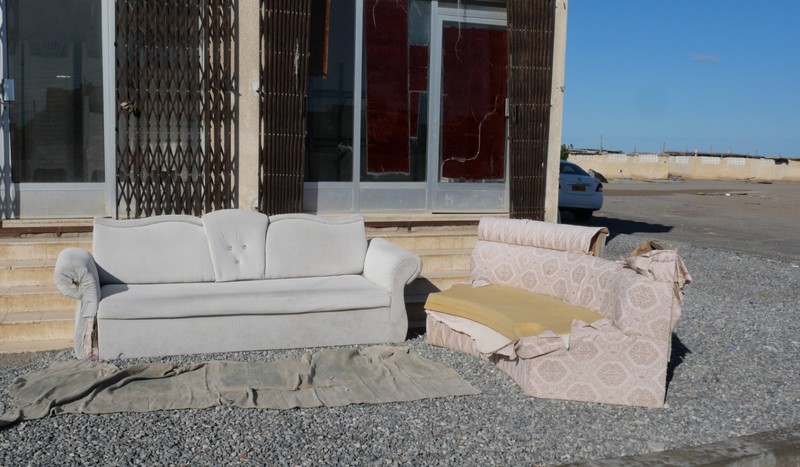 Then we rejoiced the expressway and headed back home.

Previous Next Table of contents

I have always found Middle Eastern architecture very appealing. Your photos remind me of how stunning it is and the mosaics are to die for. Whenever I have seen people praying in a mosque, they are always kneeling on the floor. I wonder what happens if somebody is unable to kneel? Are they barred, of is there a section for those that can only stand?
Loved the old sofas, they look like DFS cast offs.
As always you manage to find good food. What a pity, no beer,

Oh wow! The mosque is fabulous! How much did that cost?!?

You seem to be avoiding any pressure salesmanship, indeed receiving gifts instead!

No mention of the speed warning in the car. Did you fix it or was it a different car?

Keep up the good work, Annie!

Loved all the beautiful tiles in your mosque picture. I had Cardamom coffee in the UAE - very delicious. Enjoy your trip.

Your photos of the Grand Mosque bring back good memories of our visit to Oman earlier this year. Interestingly we too were told that it was the only mosque in the country open to non-Muslims but when we went to Salalah later in our trip we were welcomed at the mosque there by a guy obviously used to non-Muslim visitors - he even gave us a paper with a series of Tweets (from Twitter) explaining Islam

We didn't get along the coast west of Muscat - Al Seeb both sounds and looks worth a visit, so I guess the Lonely Planet guidebook was spot on, as they often are!

This blog requires you to be a logged in member of Travellerspoint to place comments.

If you aren't a member of Travellerspoint yet, you can join for free.